Dragon Quest Swords: The Masked Queen and the Tower of Mirrors

Developed from the ground up to take advantage of the Wii and its motion-sensing technology, Dragon Quest Swords: The Masked Queen and the Tower of Mirrors is set to slice its way onto Nintendo's next-generation platform. This exclusive title utilizes the Wii's motion-sensing controls as players use the Wii Remote to slash, parry and blast their way through a land filled with trademark Dragon Quest foes.

Developed with both longtime fans and casual players in mind, Dragon Quest Swords: The Masked Queen and the Tower of Mirrors is poised to take video gaming to an entirely new level of fun and interaction.

Five years pass since the defeat of the Deathbringer. The Kingdom of Avalonia is joyously celebrating the fifth anniversary of victory, and the lasting peace it seems to promise. However, all is not well...

Unfamiliar and powerful monsters have begun to appear in the wilderness. With the Deathbringer gone, what explanation can there be for their ominous presence? And what of the queen who has taken to hiding her face behind a strange mask?

Embark on a perilous quest to solve these baffling mysteries and return order to Avalonia.

The Wiimote becomes a mighty sword in this Wii-exclusive epic from the masters at Square Enix. Created by an all-star team of developers, artists, and composers, The Masked Queen and the Tower of Mirrors combines expansive adventure and stunning visuals to create an immersive fantasy world. A time of peace in the land of Avalonia is broken by the appearance of monsters and a mask that hides the face of the queen. Journey into the depths of mystery with your sword as your guide. Defend attacks, defeat enemies, and combine materials to enhance your sword's powers. Then get ready to face new and more perilous challenges as you try to complete your quest. 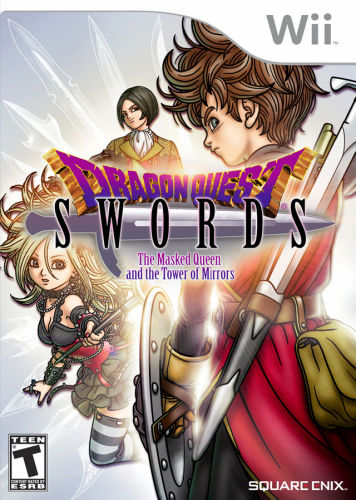