2 Games in 1: The SpongeBob SquarePants Movie / Battle for Bikini Bottom

A compilation of two games based on Spongebob Squarepants

In an effort to cause the kind of global mayhem he has always dreamed of, the evil Plankton has set in motion his most diabolical plot ever to take over the world. The fate of Bikini Bottom has been put in the hands (or small tentacles) of three unsuspecting heroes. Put your platform skills to the test as SpongeBob, Patrick, or Sandy Cheeks, with an array of insane new maneuvers and power-ups at your disposal. Explore a huge 3D world, encounter familiar friends, and finally put an end to Plankton's evil scheme.

Someone has stolen King Neptune's crown, and Mr. Krabs is the main suspect. Despite having been passed over for a promotion by Mr. Krabs, SpongeBob and his faithful (but dimwitted) friend Patrick volunteer to make the perilous journey to Shell City to retrieve the crown and save Mr. Krabs' life. Play as SpongeBob or Patrick as they interact with characters from the movie, earn "manliness" points to gain power-ups, and explore vast environments in the "Patty Wagon." 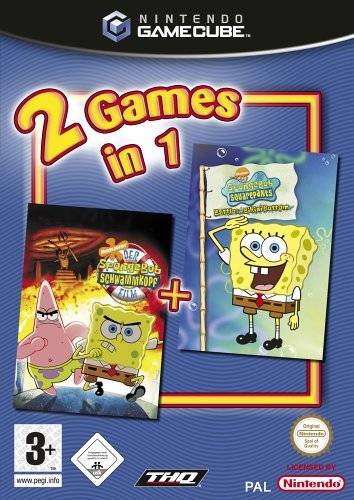