The Legend of Heroes: Trails of Cold Steel II

The sequel begins a month after the end of the first title. A civil war has broken out between the Aristocratic Alliance led by the four noble houses and the Imperial Army of Erebonia led by the reformists, with Rean having escaped with Valimar after the fall of the Empire's capital city of Heimdallr. He makes it to his hometown of Yumir where princess Alfin also escaped to, but she is kidnapped along with Rean's sister Elise. The rest of class VII has scattered over the country and he goes around gathering them and other Thors students, and after being given the airship Courageous by prince Olivier uses Valimar to help civilians and look for Alfin and Elise, as well as to help bring the civil war to an end.

All playable characters in the last game make a return and join Rean's party throughout the story. Some characters, notably Elise Schwarzer, Claire Rieveldt, and others who were either previously not playable or only temporary party members in the prequel were also added as permanent playable characters, although some of them are only available in parts of the story (but can be added to the party in end-game)

Additionally, there is an extra chapter including Lloyd Bannings and Rixia Mao, the characters from Zero and Ao no Kiseki, which involves the events in Crossbell after the ending of Ao no Kiseki.

Xseed Games announced they would be localizing both Trails of Cold Steel. 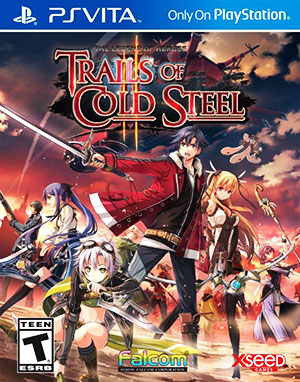