Shiro no Sho, "White Book", is a sequel to two editions of the first GBC Devil Children title. It stars two new main characters: the careless Kuzuha Masaki and the quiet Ougi Takaharu. They were born on the same day, and mysterious magical creatures appeared on their birthday. Ten years later, the two boys study at Harajuku Elementary School in Tokyo. The boys' peaceful life is interrupted when Ougi's young sister Sho is possessed by a devil unleashed from a subway construction site. In order to find the medicine to save Sho, the boys must journey across five regions dangerous regions.

Like all Megami Tensei games, "White Book" of Devil Children allows you to capture monsters and make them fight for you. You can also fuse monsters in order to get more powerful ones. Your party is always assisted by two demons, a chimera and a phoenix, who have special abilities (pushing rocks and flying) that will help you on your journey. There is a total of 330 monsters to capture. 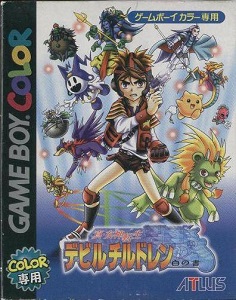