The dark world of Megami Tensei, with its heavy demonology and complex religious and moral problems, becomes much more cute and friendly in "Devil Children".

One of the two editions of "Devil Children", Aka no Sho, "Red Book", follows the story of a girl named Kaname Mirai, who studies at the Harajuku Elementary School in Tokyo. Demons from another world invade the school. Kaname and her demon-friend Veil have to capture demons, tame them, and make them fight for you.

Similar to Pokemon, you can "collect" demons, raise them, and make them fight for you. This gameplay feature also continues the tradition of Megami Tensei universe, in where demon summoning has always been an integral part of the games. This is basically "Megami Tensei for kids". However, unlike Pokemon, the two versions (Red and Black) are rather different. 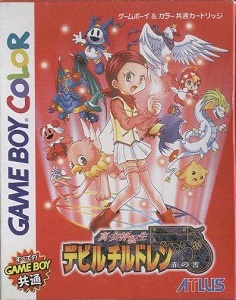