Control your fighter, with its unique ability to combine with other fighters, and shoot down the invading aliens. Aliens attack in formations using a variety of attack patterns. Rescue a captured fighter to combine with it to form a Dual Fighter with twice the firepower! Earn Perfect Bonuses more easily using a Dual Fighter on the Challenging Stages! GALAGA was released in 1981, and became an instant classic with its innovative fighter combination system and varied enemy attack patterns. 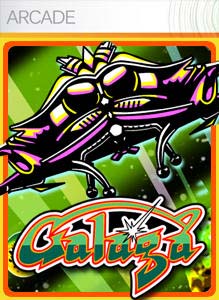