Travel back to prehistoric times! Loosely based on the computer-animated feature film.

Disney's Dinosaur is an adventure game based on the movie of the same name. You play as any of six different characters from the film (Aladar, Eema, Url, Zini, Plio and Suri) each of which has different abilities. Abilities include pushing rocks, swimming, sprinting, jumping, climbing, tail attack and crushing rocks. There are 27 levels to play in in various prehistoric settings (lava, jungle, cliffs, desert, cave). You have to avoid or destroy hostile dinosaurs and collect health flowers to stay a live. You have to collect baby dinosaurs to score points. 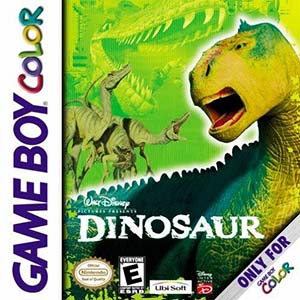