Fushigi no Dungeon: Fuurai no Shiren 2 - Oni Shuurai! Shiren-jou! (Shiren the Wanderer 2) is a role-playing video game and the second main entry in the Shiren the Wanderer series, which is part of the larger Mystery Dungeon series.

The game was the first in the series to use 3D graphics, which was done as a way to evolve the series; the development team focused on creating original features, and used the 3D engine to enable free roaming through open environments. It was originally planned for release on the 64DD, but development was later moved to the regular Nintendo 64 instead.

The game follows Shiren, a boy who aims to defend a village from attacking demons by building a castle; he finds building materials and other items by exploring dungeons. The story of Shiren the Wanderer 2 is set before the events of the original Mystery Dungeon: Shiren the Wanderer, and follows Shiren, a ten-year-old boy who travels through the mountains with his weasel friend Koppa. They come across the village of Natane, where they stop to eat. While they are eating, a tribe of demons attacks the village; Shiren decides to build a castle to defend the village and the villagers.

To do this, the player needs to find stone, iron, water, earth and wood to use as building materials. After constructing a castle, the player needs to defend it from attacking demons and defeat the demons' leader. The building materials are found within various dungeons that are spread out across the game's open world; more difficult dungeons house higher quality materials, which stand better against the demons and are less likely to break.

There are two types of dungeons: "shuffle dungeons", which consist of irregularly shaped areas, and "random dungeons", which consist of square areas connected through long hallways. Each time the player enters a dungeon, its layout and the locations of items and monsters within it change. The dungeons include traps, which the player can uncover by using their sword. The game is turn-based, with enemies taking one turn every time the player performs an action, such as walking one step or attacking. In order to damage an enemy, the player needs to be close to them; the player can move diagonally to get closer to the enemy in fewer turns.

The player can use various types of weapons in battle; they start out with just a katana, but find weapons such as broadswords and sickles throughout the game. The player also finds various items while exploring dungeons; these include health items, as well as ones used for defense and offense. In addition to the items found in dungeons, the player can buy food and power-ups from wandering merchants. The player can get help from friendly non-player characters, who have various abilities: the water imp Himakichi can swim, unlike Shiren; Asuka can equip swords, shields and armor; and Riku can use his slingshot for a ranged attack. 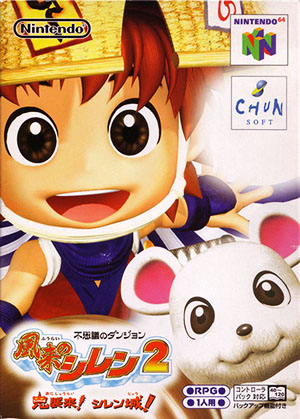