Blade Runner is a 1997 point-and-click adventure game developed by Westwood Studios and published by Virgin Interactive Entertainment for Microsoft Windows. Rather than re-tell the 1982 Blade Runner film, the developers of the game created a different story set in the same universe, which serves as a side story to the events of the film, with both narratives running parallel to one another.

The player assumes the role of "Blade Runner" Ray McCoy, who must hunt down a group of replicants (bioengineered beings designed to look like humans) in 2019 Los Angeles. As the events of game take place at the same time as the events of the film, several of the film's characters appear in the game, with the original actors returning to voice them. Although the film's main character, Rick Deckard, only appears fleetingly in a non-speaking role in the game, he is referred to multiple times, and his activities from the film are mentioned by non-player characters. Other parallels with the film include the in-game reproduction of several prominent locations, buildings, and scenes.

Blade Runner was advertised as "the first real time 3D adventure game," since it was the first adventure game to use both 3D character rendering and a game world which progressed in real-time (as opposed to waiting for player actions to progress the game world). Unlike many games of its time, which used polygon-based renderers exploiting 3D accelerators, Westwood opted for their own software-based renderer using voxel technology called "voxel plus". 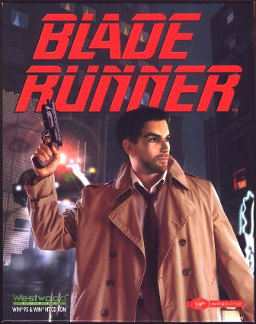