A long time ago a race of beings called the Luminoth settled the planet Aether. They built energy controllers to harness the "light of Aether" to prolong the life of their planet and its inhabitants. After many ages of peace and prosperity, a meteor collided with the planet; this collision opened a dimensional rift into another world, called Dark Aether. From this world came an evil race of beings known as the Ing, and for many ages a war was fought between the Ing of the dark world and the Luminoth of the light world. Over time the Ing began winning, turning the light world to dark. At about this time, a federation spacecraft happens to be chasing a Space Pirate vessel, which is destroyed by the Ing, through the area. Wondering about the fate of this craft, the Galactic Federation sends an urgent message to Samus Aran, asking her to find the crew and investigate the planet Aether.

This is the sequel to Metroid Prime where players once again control bounty hunter Samus Aran as she arrives on Aether. The game is played from both a first-person view(walking, running, jumping) and third-person view (morph ball mode and cut scenes). The game uses a combination of action, adventure, and platform game elements; while searching the player is able to uncover the story by finding federation reports and Luminoth lore. There are variety of puzzles to solve to reach new locations, different landscapes that the player can jump and grapple across and attack plenty of enemies. As usual, players begin the game with limited capabilities but additional weapons and suit upgrades can be found, including some standards from the Metroid series such as the varia suit, morph ball bombs, and missiles along with a few new weapons, such as the dark suit, dark beam, and light beam.

Metroid Prime 2: Echoes also features multiplayer modes for up to four players. In deathmatch, combatants need to hunt down each of the other players. This variation can be played either with a time limit or where the greatest number of frags wins. The second option is called bounty mode; in this variation each player starts with a number of bounty coins. When one player hits another player with a powerful attack, some of their coins will drop, which can be collected. Coins may also be found throughout the landscape, and the player with the most coins at the end wins. 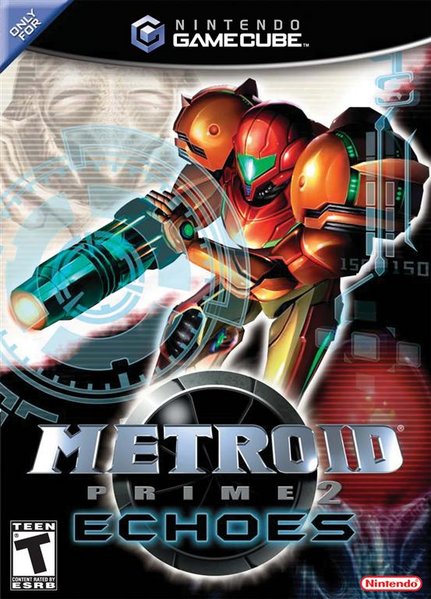