Diablo II is a hack and slash action role-playing video game, developed by Blizzard North and published by Blizzard Entertainment in 2000 for Windows and Mac OS computers.

Building on the success of its predecessor Diablo (1996), Diablo II was one of the most popular games of 2000. Major factors that contributed to Diablo II's success include its continuation of popular fantasy themes from the previous game and its access to Blizzard's free online play service Battle.net

Diablo II's storyline progresses through four chapters or "Acts". Each act following a more or less predetermined path, although there is some random-level generation in wilderness areas and dungeons between key cities. There are a list of quests which are usually required to advance the story, though some are optional. In contrast to the first Diablo whose levels consisted of descending deeper and deeper into a Gothic-themed dungeon and Hell, Diablo II's style is much more varied. While Act I is similar to the original, Act II mimics Ancient Egypt desert while Act III is supposedly based on the Maya civilization jungles. Act IV takes place in Hell and is the shortest, with just three quests compared to the other Acts that have six.

In addition to the acts, there are three sequential difficulty levels: Normal, Nightmare, and Hell; completing the game on a difficulty setting will open up the next level. On higher difficulties, monsters are stronger and are resistant to an element, experience is penalized on dying, and the player's resistances are handicapped.

Diablo II allows the player to choose between five different character classes: Amazon, Necromancer, Barbarian, Sorceress, and Paladin. Each character has different strengths and weaknesses and sets of skills to choose from, as well as varying beginning attributes. The maximum level that any character can obtain is level 99.

Diablo II can be played multiplayer on a LAN or Battle.net. Unlike the original Diablo, Diablo II was made specifically with online gaming in mind. Several spells (such as auras or war cries) multiply their effectiveness if they are cast within a party, and although dungeons still exist, they were largely replaced by open spaces. 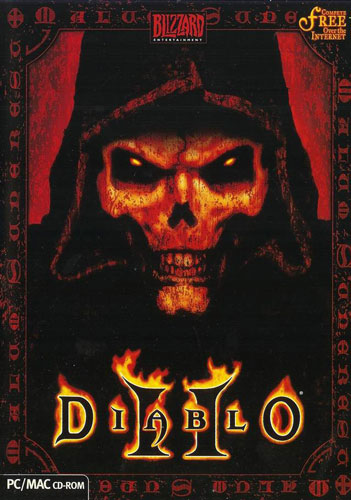