From the Island of Doh to Monster Island you will encounter Doh himself, stinging insects, hideous toy creatures, lethal combat machines, mechanical assailants, the formidable beings of legend and folklore and finally you will enter the world of darkness and its inhabitants!

Sequel to Bubble Bobble, Rainbow Islands sees Bub and Bob (in 2 player mode), who are now curiously small boys rather than dinosaurs, attempting to rid the Rainbow Islands of bad guys. Using the power to cast rainbows, trapping anything underneath, the boys must ascend vertically 4 levels each island, with a big, bad boss at the end of each. By trapping beasts under your rainbows, then jumping on them to break them you can collect seven different colored gems, and there are also power-ups for extra speed and rainbows. 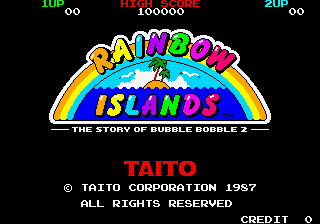