The Revenge of Shinobi

In this classic SEGA Genesis platformer, play as Joe Musashi a ninja out to avenge the evil Neo Zeed and his criminal empire. A sequel to the arcade favorite Shinobi, you once again traverse through various districts ranging from the bamboo forests of Japan to the urban streets of New York City, fighting incoming enemies by throwing Shurikens, performing special ninjutsu moves, and slashing a katana sword. Win your battles against unique bosses at the last stage of each district and make your way up to the final match with your nemesis Neo Zeed. 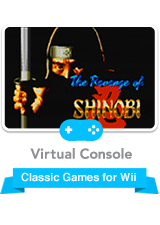