Action Man: Search for Base X

The game's plot centers around the protagonist Alex "Action" Mann, and his mission to stop the evil Dr. X from releasing a weapon of mass destruction. Action Man must find Dr. X's base by playing through levels in various locales. The player is given a variety of suits for Action Man to wear in different situations, including a parka, a wetsuit, and a space suit. Each level can be completed multiple times in order to achieve different goals; the correct suit and items are not required on the first completion of a level, but later attempts require specific suits and items to bypass obstacles. By wearing different suits and using specified items, alternate paths in levels can be discovered.

The gameplay is similar to other 16-bit era action video games. The game contains fifteen missions for the player to complete spread through six main areas. The player is allowed to choose two weapons to bring into battle with them, such as a crossbow and a pistol. The game allows the player to jump, run, swim, and climb through various areas of the game, allowing for a more varied experience. 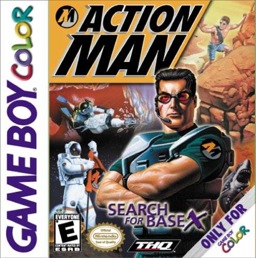