I Have No Mouth, and I Must Scream

I Have No Mouth, and I Must Scream is a psychological horror point-and-click adventure game based upon Harlan Ellison's short story of the same name about an evil computer named AM that has destroyed all of humanity except for five people, who he has been keeping alive and torturing for the past 109 years. Each survivor has a fatal flaw in its character, and in an attempt to crush their spirits, AM has constructed a metaphorical adventure for each that preys upon their weaknesses. To succeed in the game, the player must make ethical choices to prove to the evil computer that humans are better than local modern machines, because they have the ability to redeem themselves. 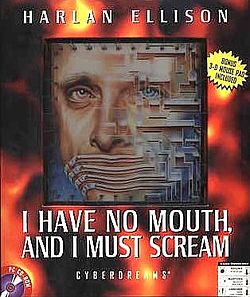