Story: Following the events of Kingdom Hearts II all appears well in King Mickey's realm, but is it?

With Organization XIII defeated and order restored to the worlds, it was just another day in the Kingdom until Jiminy Cricket noticed lines in his journal that he did not write. Realizing these to be computer like "bugs" in the journal, King Mickey calls upon a digitized version of Sora for help. The only person that can be counted on to save the glitch-filled worlds, in the datascape Sora discovers a truth that not only links him to the past, but also opens the door to his next journey...

Gameplay: Kingdom Hearts Re:coded tasks you with debuging/clearing bad data from the game journal by defeating enemies and completing objectives. The journal contains several worlds which must be explored in doing this. Different, or at least varied rules exist in each of these worlds, which in turn require varied types of gameplay for success. Gameplay types encountered include: adventure play, turn-based RPG play, side-scrolling platforming and turn-based battles. Throughout these, players utilize a variety of features and functionality including Sora's Key Blade, auto-aim, special abilities/attacks and unlockables acquired through successful combo execution, which together make Kingdom Hearts Re:coded the perfect game for both longtime fans of the Kingdom Hearts franchise and those coming to it for the first time.

Key Game Features: • The future of the Kingdom Hearts series arrives on Nintendo DS. From world-renowned creator and character designer Tetsuya Nomura comes the latest installment in the beloved Kingdom Hearts series. Sora, Mickey, Donald, Goofy and a host of familiar faces from Kingdom Hearts and Final Fantasy unite once again for an exciting new adventure. • All-new features include a new character growth system created specifically for the Nintendo DS release, building on the series' immersive blend of action and role-playing elements. • An assortment of diverse and entertaining boss battles. Guide Sora like never before through boss battles inspired by side-scrolling, shooting and classic Final Fantasy games. • Endless possibilities in the avatar menu. Players can design their own avatar using over 800 unlockable parts and trade playable maps with friends. 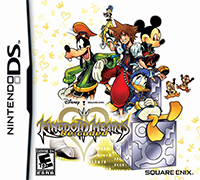