Before Crisis: Final Fantasy VII is a Japanese action role-playing game developed and published by Square Enix in 2004. It was the first original (i.e. not an enhanced remake) game to be produced by Square Enix exclusively for mobile phones, and was released on NTT DoCoMo's FOMA iMode line of phones on a monthly subscription basis. In their pre-E3, 2005 press conference, Square Enix announced that an English version of the game would be released in the United States in 2006, although no such game was ever released. Following an announcement at the Tokyo Game Show in 2006, the game was released for two additional Japanese mobile carriers, SoftBank Mobile, in January 2007, and EZweb, in April 2007.

Before Crisis is a prequel to the 1997 PlayStation video game Final Fantasy VII. It takes place six years prior to the events of that game, and focuses on the adventures of the Turks, a group of supporting characters from the original game. It was the second title announced in the Compilation of Final Fantasy VII series, although it was the first to be released, after the film Final Fantasy VII: Advent Children was delayed in post-production. 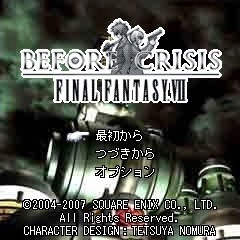