Halo 3 is the third game in the main Halo series. Like the rest of the series, it is a sci-fi/military-themed first-person shooter with an emphasis on vehicles and an extensive multiplayer mode in addition to the single-player campaign.

As before, the series' signature shield system is used where, rather than health, you have a force field of sorts which loses power as you are attacked. You needn't pick up anything to refill it, only take cover for several seconds. If you can avoid being attacked, the shield will recharge on its own.

Vehicles are again present. These are human and alien transport which can be driven or ridden in with another player or AI doing the driving. Halo 3 adds numerous new types of vehicles, notably a massive mobile command center called the Elephant and a human VTOL aircraft called the Hornet. Enemies with good timing can board a vehicle, kicking out the occupant.

Also as before, you are limited to one weapon in hand (or one in each hand for some of the smaller guns) and one on back-up with both human and alien weapons available. Weapons can be fired or used to club someone for a melee hit. There are several new weapons, including the gravity hammer, which is a massive hammer for one-hit kills in close combat. When using a single weapon, your second trigger throws grenades, which have a new spike type in addition to the basic sticky and frag ones from previous games. Turrets are back, which are mounted guns with a new missile pod variant and the added ability to rip them off their moorings and carry them around in 3rd person view.

There is a new feature called equipment where you get objects with particular effects, such as a gravity lift, a shield drain field, a shield recharge field, land mines and a bubble shield which can be penetrated by players, but not gunfire. One piece of equipment can be carried at a time and it can be deployed anywhere.

All the multiplayer game types from Halo 2 are back. This includes the standard fps games like slayer (essentially deathmatch), capture the flag, assault (reverse ctf), territories and king of the hill (territories with a single point). There are also Halo-specific games, like oddball, where you must hold an object the longest time and juggernaut, where one player gets specials powers. Only they can score points. If you kill that player, you become the juggernaut. Two new games are added: VIP, where you are tasked with killing a specific player on the other team and must protect your own VIP, and infection, which is a human team vs a zombie team and humans are infected and brought to the other team as they are killed. There are also dozens of variants of these, such as crazy king, which is king of the hill with a moving hill, mad dash which is a juggernaut games where the object is to get to waypoint instead of kill people and single-weapon versions of slayer. You can make your own custom game types by manipulating a a number of variables such as weapons, goals and player stats.

This is augmented by Forge, which is a map editor. While it doesn't have the ability to change level geometry, Forge can be used to completely change object placements. This is not only weapons and vehicles and power-ups, but spawn points, crates, fusions coils (exploding barrels), etc. The map editor is actually a playable game mode with some players becoming the monitor and placing objects for use by their teammates. They can give give them a tank, for instance, or create a barrier and levitate it along as mobile cover.

The campaign mode contains a number of new features as well. The players now control distinct characters in co-op rather than the Chief just having an identical twin, the player limit has been expanded to four and it is now playable online. There is a metagame where you score points in the campaign (used for some of the achievements) and the skulls from Halo 2 have been expanded with a checklist and additional features, such as unlocking extra armor for use in multiplayer and additional dialogue featured throughout the game.

Other new features include a theater where you can re-watch games you or others played from the viewpoint of any player-character or in third-person or with a free camera. You have the ability to save films for posterity, take screenshots or edit films for highlight reels or machinima (multiplayer only). This is a multiplayer feature, so you can watch films with people in your online party.

All of these things (edited maps, custom games, films and screenshots) can be put in a new file-sharing feature and are accessible to other players or through any PC via the internet. 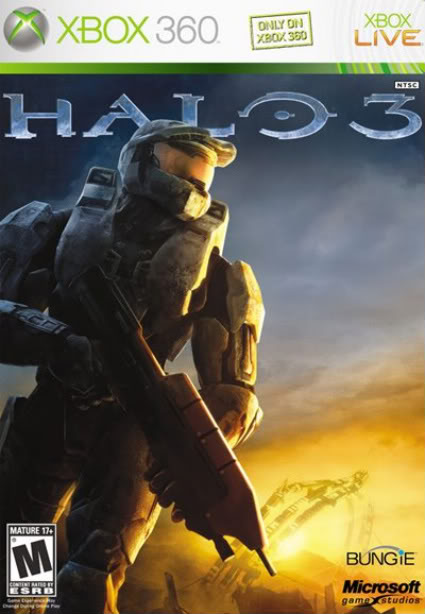