Inside a casino, during one of their heists, the group known as Phantom Thieves of Hearts is cornered by the police. Unable to escape, the leader of the group (the game's protagonist) is put under arrest, and goes into interrogation. Thus he begins to tell his story. After defending a woman from being harassed by a powerful politician, the 16-year-old protagonist is charged with assault and put on probation, which results in expulsion from his school. Following this, the protagonist is transferred to Shujin Academy in Tokyo, being forced to live at a coffee shop by the name of Cafe Leblanc, under the supervision of a friend of his parents, Sojiro Sakura. After going to school and making a couple of friends, is when the story truly starts.

Persona 5, like its predecessors Persona 3 and Persona 4, takes course during a whole school year and has elements of both social simulator and dungeon crawler. During day time, the player must attend classes, and can choose to spend his free time doing various side activities, like playing sports, fishing, exercising at the gym, watch T.V., going to the movies, going out with friends, taking part-time jobs and so on. There is a new game mechanic, the Confidant system, which is akin to the Social Link system present in previous games, whose sole purpose is to increase interaction with other characters and building relationships. The stronger the bonds with others, the stronger the benefits (usually related to the Personas themselves). This time around, and in reference to older entries in the Shin Megami Tensei franchise, the Personas are obtained through the negotiation system, where the player characters speak with the demons that are fought, and try to persuade them to join the party, through several dialogue options. Players can also demand money or items from the creature instead. The Persona fusion system is still in place, allowing the player to create more powerful Personas by fusing existing ones, while in the Velvet Room. Personas are obtained by visiting Palaces, the dungeons in this game, which are areas given physical form by the desires of corrupt individuals. Unlike previous entries, these dungeons are not procedurally generated, thus having the same layout each time they're visited. Also returning from the first Persona game are guns, which have limited ammo.

The visual presentation is based on the picaresque theme on which the story is founded upon, and is very blatant in the U.I. screens. The thematic color for Persona 5 is red, just like Persona 3 had blue for its main color theme, and Persona 4 had yellow. The game's soundtrack incorporates acid jazz elements, as well as hard rock elements during boss battles, making it distinct from previous titles. 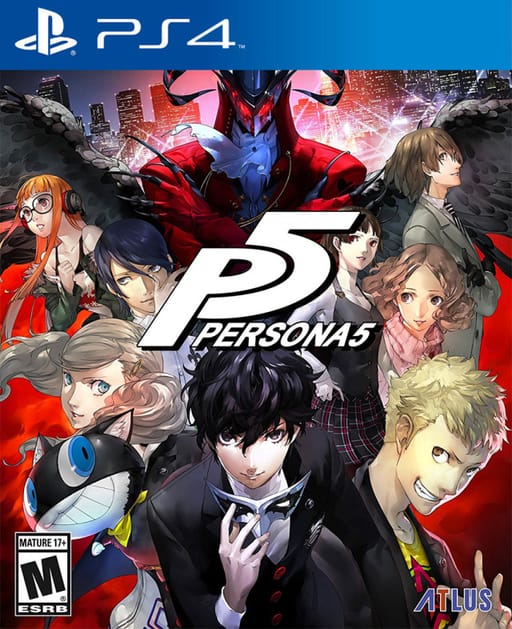