Clear Sky is a prequel to S.T.A.L.K.E.R.: Shadow of Chernobyl.

The player assumes the role of veteran Stalker Scar, who is injured and rendered unconscious by an energy emission while guiding a group of scientists through the Zone. Scar, the only one to survive, is then rescued by Clear Sky, a secret independent Zone faction dedicated to researching and learning about the Zone in their attempt to better understand it and its related phenomena. It is not known how Scar has survived the emission, but it is noted he has suffered damage to his central nervous system and seems to exhibit other, subtle physiological changes.

The nature of these changes becomes clear shortly. Word arrives that a platoon of Stalkers has come under attack by mutants, and Lebedev, leader of the Clear Sky faction, asks Scar to seek them out and help them. During the rescue attempt another emission occurs with little warning, giving Scar and the Stalkers no time to seek cover. Once again Scar is the sole survivor, recovering shortly after the emission dies down. Lebedev is amazed that Scar is still alive; the Clear Sky lead researcher, Beanpolev, believes that Scar has acquired some "unusual ability" that allows him to navigate and survive anomalies and parts of the Zone that would normally kill any ordinary man.

Lebedev begins to theorize that the Zone is being disrupted by a dramatic increase in energy emissions, emanating from the Chernobyl Nuclear Power Plant in the center of the Zone. The emissions are a sort of "immune response" to an outside force that the Zone perceives as a threat. Lebedev believes this outside force to be a group of Stalkers who are reportedly making an attempt to reach the center of the Zone, and have made it further than any other group of Stalkers before. Both Levedev and Chebekov fear that the Zone's reaction may cause untold destruction should the group succeed. Scar is asked to seek out this group and stop them at all costs.

Scar is sent to the Cordon, an area near the edge of the Zone, to get further information about the group of Stalkers. The trader Sidorovich is able to identify the four-member group of Stalkers as Fang, Ghost, Doc, and Strelok and gives Scar a lead on locating Fang. Scar follows this lead to another, and another, following a trail of leads to encounters with multiple factions of Stalkers across a large area of the Zone. Eventually Scar tracks the group's progress to Yantar, the site of a Brain Scorcher, where he learns from a scientist that Strelok has just recently obtained a prototype psionic shielding unit which should protect him from the mind-damaging effects of the Brain Scorcher surrounding the Chernobyl NPP.

Scar nearly catches Strelok in the Red Forest, only for him to escape into a tunnel leading towards Chernobyl, which is immediately collapsed behind him by an explosion. With the assistance of some recently rescued Mercenaries and the Clear Sky faction, Scar captures a nearby bridge to Limansk from Bandits, which provides an alternate route to Chernobyl. Progress through Limansk is impeded by Bandits, the Military, and the radical and heavily armed Monolith faction, who seek to kill anybody approaching the center of the Zone.

After proceeding through Limansk and finding an alternate route through the partially underground ruins of a hospital, Scar arrives at Chernobyl along with Lebedev and other members of Clear Sky. Strelok has already arrived and is progressing towards the sarcophagus surrounding the number four reactor. While Clear Sky battles with Monolith forces on the ground, Lebedev gives Scar a prototype "EM1 rifle", a long-range electromagnetic weapon, and instructs him to use the weapon to disable Strelok's psionic protection. Battling Monolith forces himself, Scar nonetheless is able to succeed. With the "threat" eliminated Lebedev anticipates a sudden settling of the Zone, but instead Zone activity increases dramatically and the plant releases an emission which incapacitates everyone in the immediate area. Scar's fate is left unknown, but several hints are provided in the original that Charon, a monolith captain, is in fact Scar, as he is the only named monolith trooper, and he has Scar's unique weapon, which is one of a kind.

The ending shows Strelok waking up in a dimly lit hallway lined with other Stalkers sitting slouched against either wall, semi-comatose. Each Stalker is facing a stripped down display which shows a series of cryptic images, part of their brainwashing process. Strelok himself is also in the process of being brainwashed. The view then moves to focus on Strelok's exposed right arm, which has been tattooed with the acronym "S.T.A.L.K.E.R." 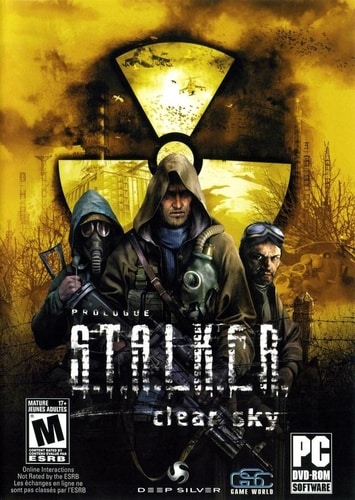