Classic NES Series: Bomberman is a port of the original Nintendo Entertainment System classic Bomberman. It was released alongside a variety of other games in the Classic NES Series in 2004. The game was also released in Japan as part of the Famicom Mini series. The game was generally poorly received among critics, primarily due to the omission of a multiplayer mode, which was the original game's most lauded feature. Gaming Age, who gave the game a 25/100, stated that "with so many better versions of the game available on the GBA, it's surprising that the developers would make you pay $20 for a title that doesn't have the series' main feature". GameSpot said that "A Bomberman game without multiplayer is hardly a Bomberman game at all", and rewarded the game with a 4/10. 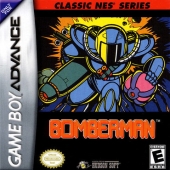