Zelda II: The Adventure of Link

This is a Game Boy Advance re-release of the classic Famicom game. Emulated for Game Boy Advance, the Japanese Famicom Mini special edition shipped in a unique clear cover box, with a smaller carton inside holding the game cartridge. The US version ships in a standard GBA box.

The shadow of Ganon looms over the land, and Link will have to use all of his newly-learned techniques to unravel the mysteries behind why evil haunts this land. The sequel to the Adventure/RPG classic, Zelda II used a sidescrolling visual engine unique to the series for more technical combat, and featured more in-depth world roaming as Link encountered townsfolk while on his quest. 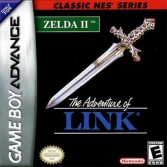