Killing Floor is a first person shooter, allowing each player to move through a 3D environment. Gameplay consists of a single game type, in which the player fights waves of zombie-like specimens, with each wave becoming successively more difficult, until it concludes with a battle against a "boss" specimen, called the Patriarch. Players earn in-game money for each kill, as well as for surviving to the end of a wave. In the time between each waves, players can visit a trader to buy and sell ammo, armor, and additional weapons; the Trader's location on the level varies at the end of each wave, discouraging players from camping in one location. Weapons may also be found randomly across the level. Players are encouraged to work together; they can trade items and drop money, healing is more effective on other players than on oneself, and the team can strategically weld doors shut to provide a temporary barrier from the oncoming horde while funneling the other creatures to specific areas. 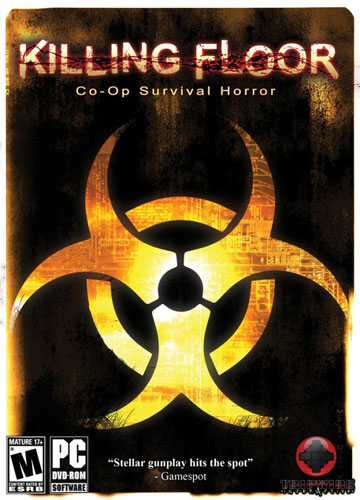