Kirby: Planet Robobot is a traditional platformer Kirby game; in it, the player controls Kirby, whose objective is to get to the end of each stage by using Copy Abilities. Kirby retains his moves from Kirby: Triple Deluxe, including the inhale, Star Spit, Slide attack, air bullet, floating, and guarding. In addition to these abilities, Kirby is now able to climb grates as well and carry some objects underwater.

The game is a 2.5D platformer, and characters move on a two-dimensional plane in a 3D environment. The game's camera moves around to show different angles in some stages, similarly to Kirby 64: The Crystal Shards. The physics and graphics of the game are mostly reused from Kirby: Triple Deluxe.

The most major mechanic that is introduced in this game is the Robobot Armor. In several levels, Kirby can take these mech suits, either by defeating an Invader Armor or by finding a suit in the stages themselves, and use them to solve puzzles or to explore secret areas. Unlike the Super Abilities from Kirby's Return to Dream Land and the Miracle Fruit from Kirby: Triple Deluxe, which were designed to appear near the end of several stages, most stages with the Robobot Armor are designed to be used throughout them. In some cases, the Armor is entirely optional or hidden, and isn't required to complete the stage. 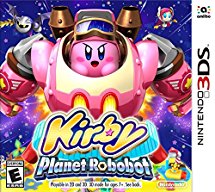