Sacrifice is a real-time strategy video game. Developed by Shiny Entertainment the game features elements of action and other genres. Players control wizards who fight each other with spells and summoned creatures.

Unlike many of its contemporary real-time strategy games, Sacrifice places little emphasis on resource gathering and management. There is no system of workers; the players' wizards collect souls to summon creatures, and their mana—energy for casting spells—constantly regenerates. Players customize their attacks by choosing from spells and creatures aligned to five gods. To defeat an opponent, the player's wizard sacrifices a friendly unit at the opposing wizard's altar, thereby desecrating it and banishing the enemy wizard. Aside from a single-player campaign, Sacrifice offers a multiplayer mode, in which up to four players can play against each other over computer networks. 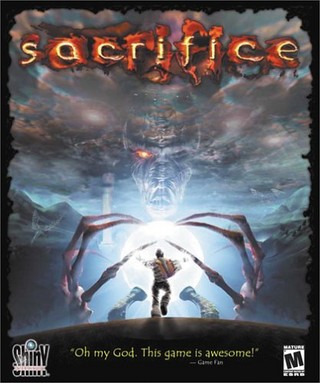