From the ashes of old conflicts, a new terror arises. The Umbrella Corporation and its crop of lethal viruses have been destroyed and contained. But a new, more dangerous threat has emerged. Years after surviving the events in Raccoon City, Chris Redfield has been fighting the scourge of bio-organic weapons all over the world. Now a member of the Bio-terrorism Security Assessment Alliance (B.S.A.A.), Chris is sent to Africa to investigate a biological agent that is transforming the populace into aggressive and disturbing creatures. Joined by another local BSSA agent, Sheva Alomar, the two must work together to solve the truth behind the disturbing turn of events. Featuring a revolutionary new co-op mode of gameplay, Resident Evil 5 will let you experience fear together as terror moves out of the shadows and into the light of day.

● All Previously Released DLC - Includes costumes, game modes, figurines and bonus story scenarios "Lost in Nightmares" and "Desperate Escape". ● Score High in Mercenaries - In The Mercenaries United, take on waves of iconic enemies and bosses in limited time to achieve a high score. This mode features 8 playable characters like Albert Wesker and Jill Valentine, each with different costumes and loadouts to choose from. For an added challenge, opt for No Mercy mode to face even greater numbers in Mercenaries. ● Two Playable Characters - Chris Redfield, protagonist of the original Resident Evil and Resident Evil Code: Veronica, returns and is joined by new playable character Sheva Alomar, an African BSAA agent tasked with investigating the epidemic. ● Two Player Local/Online Co-op - Cooperatively-focused gameplay revolutionizes the way that Resident Evil is played. Chris and Sheva must work together to survive various challenges and fight dangerous hordes of enemies. ● "Quick-Select" Inventory System - Improved inventory system allows items to be traded between characters. To add to the intensity, all inventory management is done in real time; items can even be assigned to the directional pad for instant access. ● Challenging Enemies Pose New Threats - Enemies boast increased speed and intelligence from previous games in the series, making them as dangerous alone as they are in groups. ● Powerful Arsenal of Weapons - The number of weapon variations has been greatly increased since prior series' entries, providing new ways to keep enemies at bay. ● Fear Light as Much as Shadow - Lighting effects provide an intense level of suspense as players attempt to survive in both harsh sunlight and extreme darkness. 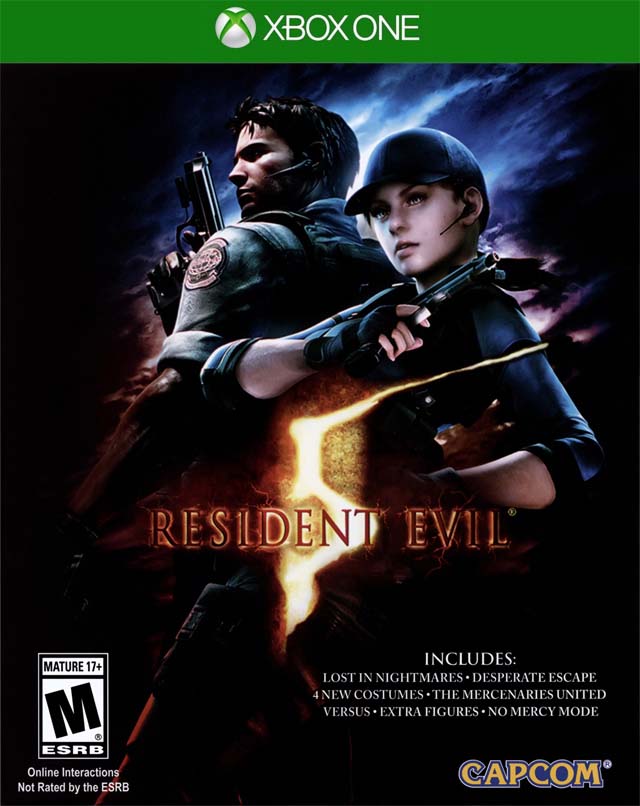