Step into the shiny wingtip shoes of Harvey Birdman, third-rate superhero now third-rate attorney. Visit familiar locals from the show, interview off the wall cartoon characters, paw through their personal items looking for clues and then take the whole kit and caboodle to court. With FIVE CASES going to trial with mind-taking judges and attorneys armed with shrink ray guns, you're going to need some law books.

The game is played like the Ace Attorney Capcom court-themed series, but with the Harvey Birdman type of humor and feel. The game also include cameos of Capcom characters within the 5 cases. A trailer for the game shown at the 2007 E3 Convention confirmed that the game included the mechanics of cross-examination and evidences lists from the Ace Attorney series, as well as cameos by many Street Fighter characters. Thanks to the show's simple flash process, the game was able to closely mimic the show's animation. 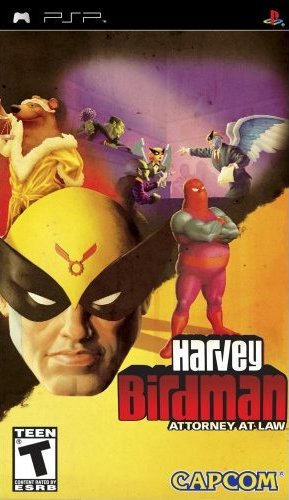