Emily Is Away is an indie visual novel by game developer Kyle Seeley, released for free in November 2015. The game's story is linear, with the player unable to significantly change the course of the plot throughout the game. Set in the early/mid 2000s, Emily Is Away tells the story of the protagonist's relationship with a girl, Emily, over the course of five years, from the senior year of high school to the senior year of college. The game is presented through a chat client on Windows XP styled after ICQ and AOL Instant Messenger, specifically their builds in the early and mid 2000s, complete with other users' profiles and interface. 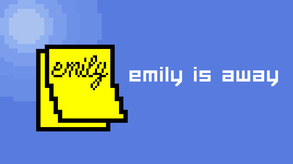