In an age long past, the world was suffocating under the crushing grip of war. Only the efforts of the idealistic Avalonian Empire were enough to bring the warm embrace of peace to the land and lead it toward a new age of prosperity. Fate itself brought together those whose lives were filled with hope and those whose duty sent them from the harsh north. As they locked eyes, the Crystal shed forth an immense light that filled the land, drowning everything in silence. And then, the world was sundered into light and darkness.

Drawing upon the roots of the series with such features as beautiful 2-D pixel art, a battle system involving job change-based character growth and ability combinations, and a classic story of light, darkness, and crystals, FINAL FANTASY DIMENSIONS delivers the best of FINAL FANTASY, retro and fresh alike, directly to you. 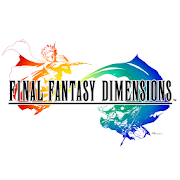