The game is set in the near future, where sections of an alien spacecraft have crash-landed in several major cities around the world including Baghdad and Tokyo.

The player assumes the role of the commander of an armor battalion (referred to as "14th Platoon" in the story) sent to investigate anomalies that have occurred in the vicinity of the wreckage and gather information on what is happening in the affected areas, as the anomalies are interfering with radar and satellite imagery - and to neutralize any threats that may exist within the anomalies' field of influence.

The style of the gameplay has been described as "reverse tower defense", "tower attack", and "tower offense". Players control a convoy of vehicles investigating anomalies around sections of a downed alien spacecraft, which are protected by various types of defensive towers that have to be destroyed. Players do not directly control the vehicles in the convoy, rather they set paths for the convoy to follow along city streets, while also dropping power-ups such as decoys or smoke-screens to aid the survival of the convoy. In addition, players can purchase and equip a number of different units with varying offensive and defensive attributes to make up the convoy. 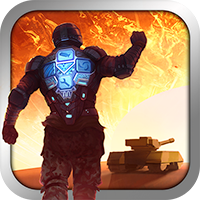