In 1985 18 men were shot dead in a ramen shop. This event marked a turning point for the Ueno Seiwa clan, but the truth behind the incident has remained hidden. In 2010 four men, a chivalrous money-lender, a condemned man sitting on death row, a crooked cop, and the Dragon of Dojima, are drawn together as a plot 25 years in the making nears fruition.

Yakuza 4 introduces three new characters to the Yakuza franchise: Shun Akiyama, Taiga Saejima, and Masayoshi Tanimura. Each character has their own storyline that ties into the overall events taking place, and in combat each controls similarly to Kiryu, although with their own simplified move set and personal flourishes: Akiyama has several moves involving taunting, Saejima can use his immense strength to lift heavy objects and people, and Tanimura can counter attacks while blocking as well as chain a combo into a HEAT action.

Although the game predominantly takes place in the fictional Tokyo district of Kamurocho, the area has seen some expansion in the way of newly accessible rooftops, an underground mall and parking garage, and a sewer system. As in previous Yakuza games, side stories and mini-games can be found by wandering the streets and entering businesses. Hostess clubs and a massage parlor also make their return after having been excluded from the western release of Yakuza 3; the only content cut from the western release of Yakuza 4 is the Answer x Answer arcade game and the theme song "Butterfly City". 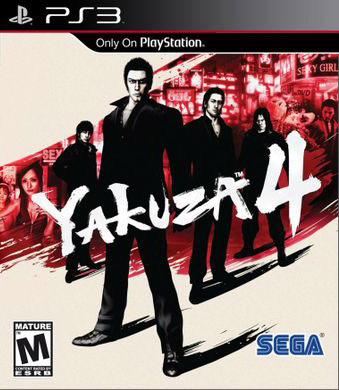