Yu-Gi-Oh! Worldwide Edition: Stairway to the Destined Duel is a Game Boy Advance game based on the popular Yu-Gi-Oh! trading card game and TV series that has the player set during the Battle City arc, dueling popular characters from the anime and manga. The main objective of the game is to build a strong deck from cards won after duels from the main cast from the English second season anime.

The game starts out after the title screen, with one of the officials in the Battle City region, giving the player an option of 1 of 3 decks of 40 or more cards. Once a deck is selected, there is a Battle City map of characters that can be played, and can select an area of Battle City that holds up to three duelers per area. However, the opponents are random, not showing a name or picture to identify their character.

The player must win, lose or tie to show all the characters at the beginning. From there, players go around Battle City to duel opponents. However there are many events during the game to accomplish. 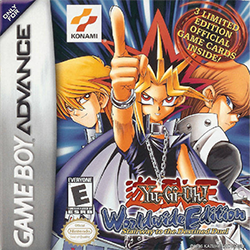