Parasite Eve is a horror action role-playing game developed by SquareSoft (now Square Enix). The game is a sequel to the novel Parasite Eve, written by Hideaki Sena. It is the first game in the Parasite Eve series.

The game begins with Aya Brea, an NYPD rookie, attending an opera at the Carnegie Hall with an unnamed date. During the opera, everyone in the building spontaneously combusts, except for Aya, her date, and an actress on stage named Melissa Pearce. Aya confronts Melissa backstage, and Melissa says that Aya’s mitochondria need more time to develop. Melissa then mutates into a beast and flees into the sewers, declaring that her name is now Eve.

Parasite Eve is an action role-playing game with many horror elements. Movement in the various environments is free. Movement in the "world map" (which is a map of Manhattan) is limited to specific destinations. Upon the player walking over a "hot spot," there's a chance of a random encounter. Each time the encounter occurs, the likelihood of the battle reoccurring decreases. 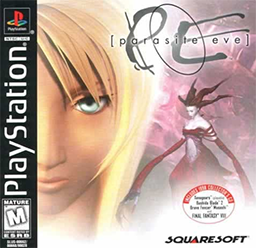