Superbrothers: Sword & Sworcery EP is an adventure game from Capybara Games. As the Scythian, the player seeks the mysterious Megatome in a beautiful fantasy world rendered in a distinctive pixel art style. "EP" is a music reference; the soundtrack is part of the package and gameplay.

Superbrothers: Sword & Sworcery EP is an artistic game set in a fantasy world, which is filled with beautiful nature vistas, wild animals, and magic. The player takes control of a character called The Scythian and embarks on an adventure for the so-called Megatome. After reclaiming this artifact The Scythian is granted the ability to use magic, and can also literally read the thoughts of other people (and a dog). The game relies heavily on strong audio and graphical design. Some sections of the game are dependent on the lunar cycle, with certain puzzles only available during a full, half, or crescent moon. 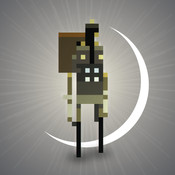