Wario World is a platformer video game for the Nintendo GameCube released in 2003. It is a spin-off of the Wario Land games. In 2004 it was re-released as a Player's Choice title. It has sold well, with 142,000 copies in Japan and over 256,000 copies in the United States, and has received average reviews, though it was criticized for its short length for a 3D platformer.

Each time the player collects all treasures in a world, a microgame from WarioWare, Inc.: Mega Microgame$! is unlocked. These games can only be played using a Game Boy Adapter, which connects the Game Boy Advance to the GameCube (not included with game). 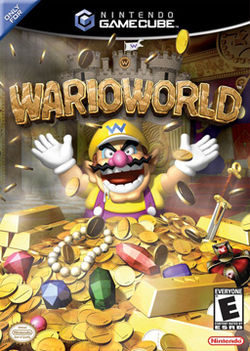