NBA Street V3 is a crossover basketball video game developed by EA Canada for the Nintendo GameCube, the Xbox and the PlayStation 2. It features Mario, Luigi and Princess Peach as playable characters in the GameCube version, due to a deal Nintendo had with EA to put Mario characters in their games. It was never released in Japan. 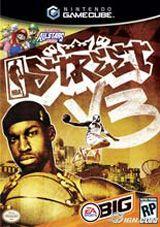