Batman Forever is a beat 'em up video game based on the movie of the same name. Though released by the same publisher at roughly the same time, it is an entirely different game from Batman Forever: The Arcade Game.

The player plays as either Batman or Robin. There is also a fighting game mode called "training mode" where the player can play as Batman, Robin, or any of the enemies found throughout the game against either a computer-controlled opponent, against a second player, or cooperatively against two computer opponents.

The controls are largely based on move lists and key sequences. Some gadget moves involve moving away from the enemy right before pressing a punch or kick button.

The gadget list is selected by the player each level, with three standard gadgets for each character and two gadgets selected from a list. There are also four hidden "blueprint" gadgets.

There are two kinds of Co-op modes in Batman Forever. Players chose between Batman or Robin. In one mode, Batman and Robin work together and cannot harm each other, although they share credits. In another mode, however, Batman and Robin can attack each other, but still need to look out for enemies and have separate credit counts. The co-op mode is not included in the Game Boy and Game Gear versions. 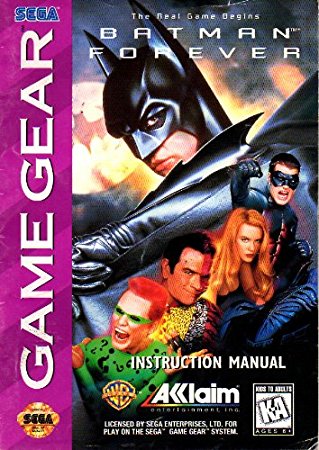