The mighty wrath of Shiro Amakusa is reborn! Who can stop him? The sparks fly when 17 swordsmen clash, and it all ends at the evil walls of Amakusa Castle! Featuring all your favorite warriors plus two new characters!

Chronologically, Samurai Shodown IV is the second and final chapter of an interlude between Samurai Shodown and Samurai Shodown II, being Samurai Shodown III the first chapter. The most obvious change is visual, with dramatically adjusted color palettes for the individual characters, generally brightening them up and reducing contrast, in the attempt to make the game more cartoonish. Bringing a new breath to SNK's swordsman fighting series, this 4th installment marks the return of 3 classic characters, introduces 2 newcomers and brings some new backgrounds. The game preserved many elements like the dodge move and the chance to choose between two versions of the fighter: the standard one and an alternative dark-styled one. The single-player mode now has a timer, as well. Only by reaching the final boss within a specified time limit can one see a character's ending. 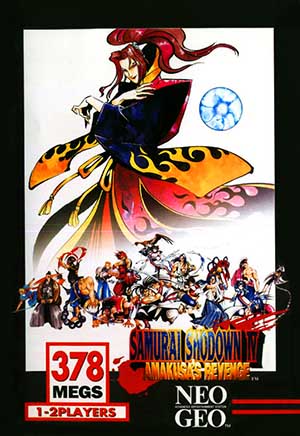