Now's you chance to strut your stuff in the skies as you take on the German and Japanese air forces in Strikers 1945. Choose from six World War II airplanes and blast away at the wide variety of enemies you'll find in eight stages of action. Luckily, there are three different attacks to choose from: the standard guns or missiles attack that is unlimited and becomes stronger as you collect power-ups; smart bombs that will destroy every enemy on the screen and are limited in number; and three power meters that govern special attacks. To execute one of these special attacks, you just hold down the attack button to charge and unleash the attack. Even though you know that failure is not an option, should you lose all of your lives you can continue the game a limited number of times. So keep you eyes on the prize and try to win the war for the Allies in Strikers 1945. 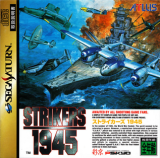