Conker's Bad Fur Day was in development for four years and was originally intended for a family audience, but was redesigned and marketed to a much older demographic. It features graphic violence, sexual themes, strong language, toilet humor, and several film parodies. The game received very positive reviews from video game publications, which praised the game's graphics, audio, and presentation. It is widely considered by many critics to be the best-looking game on the system. The game sold poorly due to limited advertising and a release towards the end of the Nintendo 64's life-cycle, but earned a cult following due to its unique styling. A remake, titled Conker: Live & Reloaded, with enhanced graphics and a different multiplayer mode, was released for the Xbox in 2005.

Conker's Bad Fur Day is an action-platform game where the player controls Conker the Squirrel through a series of three dimensional levels. The game features an overworld where players can transition from one level to another, although many are initially blocked off until Conker earns a certain amount of cash. Each level is an enclosed area in which the player can freely explore in order to find tasks to do. The gameplay mostly relies on figuring out a way to help other characters by completing a linear sequence of challenges. These challenges may include defeating a boss, solving puzzles, gathering objects, and racing opponents, among others. The result is always a cash reward, which aids access to other areas in the overworld. 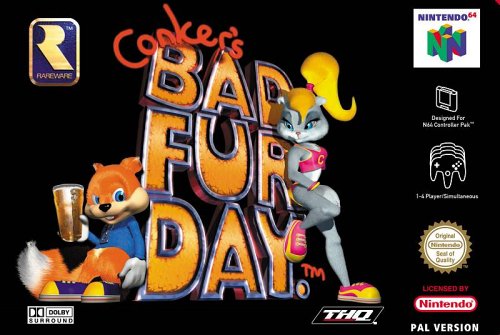