Humanity is the midst of a long war against an alien alliance called the Covenant who have been wiping out colony after colony. You hero is Master Chief, who is given no name beyond his rank in the game itself. He is stationed on the Pillar of Autumn, a ship which, per protocol make a jump in a random direction to retreat to avoid revealing the location of Earth. They find themselves at the titular Halo, a planet-sized ring of mysterious origin and function with the Covenant on their heels. Master Chief must repel the Covenant assault and discover the secrets of Halo with the assistance of the female AI Cortana who lives in his suit and gives missions.

Halo: Combat Evolved is a sci-fi first-person shooter with considerable driving elements. Features include friendly NPCs who fight alongside the Chief, squad-based AI where enemies groups work together to flank you under the direction of a leader unit and can be demoralized by his death. They also use cover, set ambushes, etc.

Only two weapons may be carried at a time: one active and one on back-up. There are five human weapons and three Covenant with distinct art styles for the two groups. Human weapons look basically like real guns and fire projectiles. Covenant are sleek and purple and fire energy. For the most part, weapons are not just left around the environment and must be procured from fallen enemies though there are supply points.

Your life is armor and health as in most games of the genre, however, rather than armor being an item than is picked up, it is a force field which quickly recharges itself after several seconds without taking damage, which emphasizes finding cover.

One of most significant features is vehicles. You can drive a variety of vehicles in both single player and multiplayer, some of which have additional seats for passengers or gunners which can be used by AI characters. Vehicles also come in distinct human and Covenant varieties with their design philosophies. Human vehicles roll around the ground on wheels and covenant vehicles hover or fly.

Halo also has a significant multiplayer component with basic deathmatch (called slayer here), capture the flag with the unusual addition that the flag takes your weapon spot while you are holding it, so shooting your way in and out of the base on your own is not an option, territories, and some options unique to the game, such as oddball, where you must hold onto a skull for the longest time, race where you score points by getting to checkpoints and juggernaut, where one super-powered player must get points by killing the others and the other players try to kill him to steal his powers. There is also a game editor which allows you to set custom rules for all the basic game types. All the playable weapons and vehicles from the campaign mode are available in the multiplayer maps with the ability for members of the same team to share the game's distinctive Warthog vehicle, which is essentially a small truck with a mounted gun on the back.

Halo is set in the twenty-sixth century, with the player assuming the role of the Master Chief, a cybernetically enhanced super-soldier. The player is accompanied by Cortana, an artificial intelligence who occupies the Master Chief's neural interface. Players battle various aliens on foot and in vehicles as they attempt to uncover the secrets of the eponymous Halo, a ring-shaped artificial planet. The game has been called "easy to learn", and has been praised for its "engaging story".

Many game magazines have praised Halo as one of the best and most important games of all time. The game's popularity has led to labels such as "Halo clone" and "Halo killer", applied respectively to games either similar to or anticipated to be better than it. In addition, the game inspired and was used in the fan-created Red vs. Blue video series, which is credited as the "first big success" of machinima (the technique of using real-time 3D engines, often from video games, to create animated films). A prequel to the game and Bungie's last Halo title, Halo: Reach, was released on September 14, 2010. 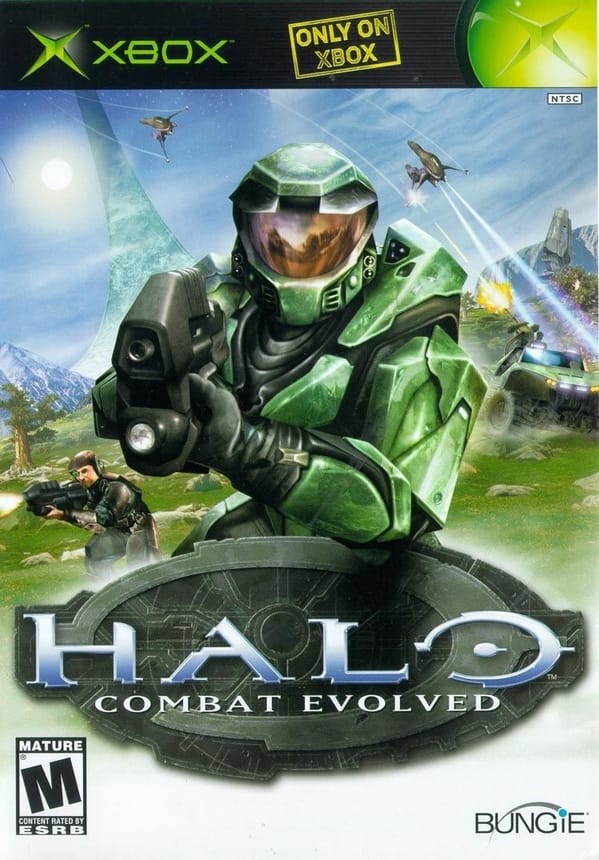