Deus Ex Machina was a computer game designed and created by Mel Croucher and published by Automata UK for the ZX Spectrum in October 1984 and later converted to other popular 8-bit formats.

The game was the first to be accompanied by a fully synchronised soundtrack which featured narration, celebrity artists and music. The cast included Ian Dury, Jon Pertwee, Donna Bailey, Frankie Howerd, E.P. Thompson, and Mel Croucher (who also composed the music). Andrew Stagg coded the original Spectrum version, and Colin Jones (later known as author/publisher Colin Bradshaw-Jones) was the programmer of the Commodore 64 version.

The game charts the life of a "defect" which has formed in "the machine", from conception, through growth, evolution and eventually death. The progression is loosely based on "The Seven Ages of Man" from the Shakespeare play, As You Like It and includes many quotations and parodies of this.

Despite critical acclaim at the time, the game did not conform to conventions of packaging and pricing required by distributors and retailers and the game was sold mail-order only direct to the public. It subsequently gained cult status as an underground art game. 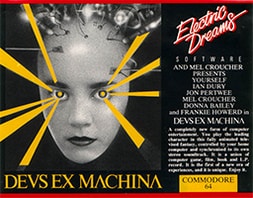