The game is centered on characters from Nintendo's video gaming franchises such as Mario, The Legend of Zelda, and Pokémon. The stages and gameplay modes make references to, or take their designs from, popular games released by Nintendo. Melee's gameplay system offers an unorthodox approach to the "fighter" genre as percentage counters measure the level of damage received, rather than the health bar traditionally seen in most fighting games. It builds on the first game's broad appeal by adding new features related to gameplay and playable characters. Following the popularity of its multiplayer gameplay, Melee has been featured in several multiplayer gaming tournaments.

The game received a generally positive reception from the media, as well as awards and acknowledgements from gaming publications. It achieved strong sales upon release, and is the GameCube's best-selling game, with more than 7 million copies sold as of March 10, 2008. 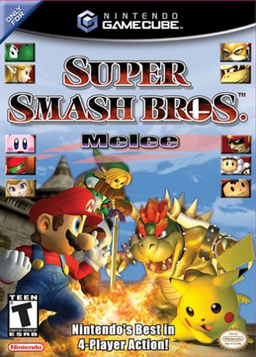