Manhole-e is an e-Reader video game released in 2002 by Nintendo. It is a remake of the Game & Watch video game Manhole. In order to play the game the player had to scan a single card with two barcodes using the e-Reader. The game was included free of charge with the e-Reader. It should also be noted that a version of the game was included in the E3 2002 Promo Pack, though the actual card looked differently, sporting the E3 logo. The actual game contained within, however, was the same.

Manhole is a Game & Watch game. In the game, you must save pedestrians from falling into manholes by covering them up. If one falls through, you will lose and will have to start over.

This was the only Game & Watch e-Reader game to be released. Nintendo initially planned to release a variety of games under a Game & Watch Collection label, though their plan was never fulfilled, perhaps due to the unpopularity of the e-Reader. 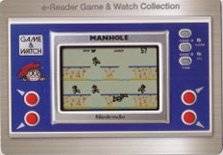