The Goonies is based on the Steven Spielberg film of the same name, in which a motley crew of suburban kids in Astoria, Oregon, must save their homes from being foreclosed upon and find their salvation in a treasure map leading to an old pirate ship in a cavern. However, they must maneuver around an eccentric family of Italian criminals -- the Fratellis -- on the lam, who are also on the trail of the treasure.

The game is divided into a series of eight screens based on scenes from the film, each of which contains puzzles that must be solved by coordinating the activities of two of the kids from the Goonies (and in the last screen, the elephant-man-like Sloth) without getting killed by deadly bats, homicidal Fratellis, flying demon-skull thingies, or other environmental hazards. 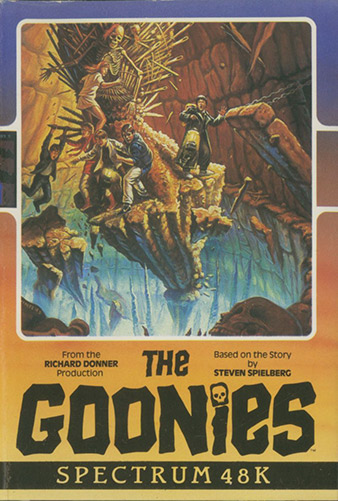