A compilation originally made for arcade cabinets and ported exclusively in Japan to the PlayStation and the Sega Saturn, Wonder 3 (Three Wonders outside Japan) contained three games from which a player may choose. The first game is Roosters: Chariot no Sagashite (Midnight Wanderers: Quest for the Chariot), a platform game, the second one is Chariot: Tenkuu he no Tabi (Chariot: Adventure through the Sky), a shoot 'em up game and the third one is Don't Pull, a puzzle game.

► Midnight Wanderers: Quest for the Chariot Lou and Siva go on an adventure into the Demon's Castle to liberate the legendary Chariot of Light from the evil demon Gaia. An action/shooting platformer game, the various weapons and allies make for a very fun and high-paced game.

► Roosters: Chariot no Sagashite Unique flying/shooting game in a fantasy setting. Lou and Siva are back but this time they must fly the Chariot in battle against the demon Lar and save the kidnapped princess. Stages include the air, moon world, dark world and four more.

► Don't Pull Enjoy the puzzle fantasy world of the two adorable characters Don and Pull in these easy to understand but delightfully challenging puzzle action game. A 2 player interactive game, players can join in at any time with the game continuation buy-in feature. 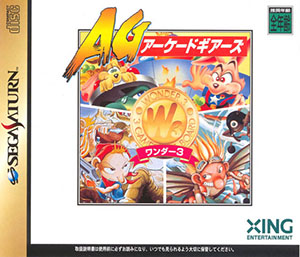