Blur is the ultimate powered-up racing experience, dropping players into heart-pumping, electrified action with up to 20 cars trading paint as they charge towards the finish line. Drivers careen through real-world track locations packed with fast curves, sneaky alternate routes and hair-raising jumps in over 50 licensed cars as they collect and tactically utilize intense Power-ups, including the ability to blast other cars out of the way with huge bursts of energy, boost their speed, and more. For the ultimate multiplayer racing gameplay experience, Blur offers a first in the racing genre with up to 20 players online at the same time, a progressive ranking system that rewards gamers the more they play, objective based race events, and if that weren't enough, Blur brings back a fan favorite with 4-player split-screen gameplay.

● POWERED-UP RACING - Go beyond just racing and enter the world of Blur. Take on the best as you battle through New York to Barcelona, Tokyo, L.A. and beyond. ● Power-Ups: Utilize an arsenal of Power-ups like Nitro speed boosts, Shock attacks, defensive Shields, and Mines. Combo Power-ups for devastating attacks and take the fight to your rivals. ● Real Racing: Real world locations, stunning racing environments and more than 55 licensed photo-realistic cars with advanced damage. ● Multiplayer: 4 player split-screen, 20 player competitive online and Team racing. Unlock unique Mods to customize and Power-up your Blur experience, stand out and become a legend. 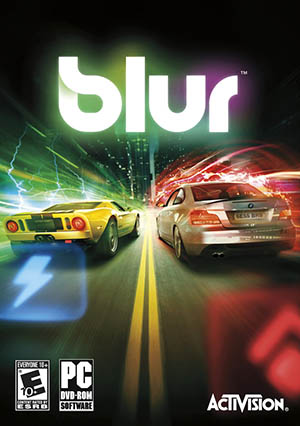