Magical Drop is a competitive puzzle game. The goal of the game is to clear the screen of constantly advancing objects called 'drops'. The player is located at the bottom of the screen while drops appear from the top of the screen. The player is capable of grabbing and releasing all similarly-colored Drops. Drops are cleared when three or more Drops of the same color are eliminated. A player is defeated when a column of Drops reaches beyond the bottom boundary of their field. A secondary method of victory is "Quota," where the first player to clear a predetermined number of drops is declared the winner of the round.

There are several game modes: endless mode, story mode, two-player mode, and puzzle mode. The game was re-imagined for the Sony PlayStation and Sega Saturn with different, pre-rendered characters, there are still 6 different characters but named different of the original arcade release. 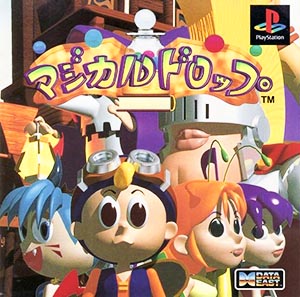