Guitar Hero III: Legends of Rock is a music video game, the third main installment in the Guitar Hero series, and the fourth title overall. The game was published by Activision and RedOctane, and is the first game in the series to be developed by Neversoft, after Activision's acquisition of RedOctane and MTV Games' purchase of Harmonix Music Systems, the previous development studio for the series. The game was released worldwide for the PlayStation 2, PlayStation 3, Wii, and Xbox 360 in October 2007, with Budcat Creations and Vicarious Visions assisting in the PlayStation 2 and Wii ports, respectively. Aspyr Media developed the PC and Mac versions of the game, releasing them later in 2007.

Guitar Hero III: Legends of Rock retains the basic gameplay from previous games in the Guitar Hero series, where the player uses a guitar-shaped controller to simulate the playing of lead, bass, and rhythm guitar parts in rock songs by playing in time to scrolling notes on-screen. The game, in addition to existing single-player Career modes, includes a new Co-Op Career mode and competitive challenges that pit the player against in-game characters and other players. Guitar Hero III: Legends of Rock is the first game in the series to include an online multiplayer feature, which is enabled in the Xbox 360, PlayStation 3, and Wii versions. Initially the game offers over 70 songs, most of which are master tracks. The Xbox 360 and PlayStation 3 versions feature the ability to download additional songs. The musicians Tom Morello (of the bands Rage Against the Machine and Audioslave) and Slash (of Guns N' Roses and Velvet Revolver) make appearances both as guitar battle opponents and playable characters in the game. The PC, PlayStation 3, and Xbox 360 versions also include Bret Michaels (of Poison) as a non-playable character.

Critics were generally favorable towards the game, but reviewers noted a difference in the game's style compared to previous installments, associating it with it being Neversoft's first development attempt with the series. The game is often cited to be too difficult, creating "walls of notes" that are difficult to complete, and led to alterations in note placement for future games in the series were designed. According to Activision, Guitar Hero III: Legends of Rock is the best-selling video game of 2007, both in terms of units sold and revenue earned, and that it is the first single retail video game to exceed one billion dollars in sales. The company also claimed that it is the second-best selling video game title since 1995, following Wii Play, and is one of the best-selling third-party games available for the Wii. 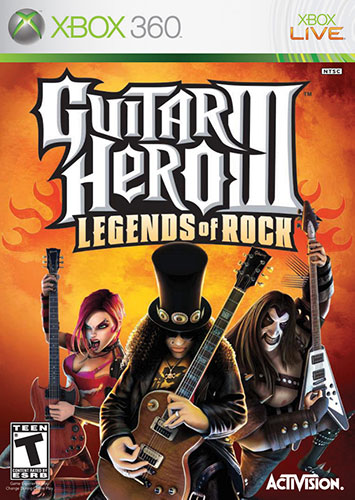