Not to be confused with the similar Virtual Boy title 3D Tetris, as the two games are entirely different. V-Tetris, unlike 3D Tetris, is mostly the same as the original Tetris games, the only difference being the cylindrical puzzle mode in which blocks could be placed in a 3-D spiral.

The game is another version of Tetris with its own set of graphics, sounds, and other quirks. Rotate blocks, and when you've formed a complete line they disappear. Mode A is the familiar endless mode of play. Mode B is another common mode, where there are a set number of lines you must clear before victory is declared. Mode C is the most unique in this game: the game field is twice as wide, but you only use half of it at once; the other half is displayed further away in the background. You can scroll left or right at any time, creating new possibilities for creating lines and strategies. 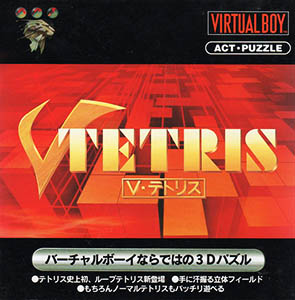